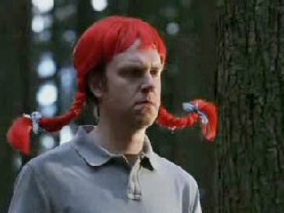 I tried, okay. I have really tried to give these ads a chance.

Dave Thomas always seemed like a pretty good guy. He sponsored and created charities supporting adoption and foster care. His restaurants always promoted local sports programs and activities for kids. Heck, the guy even went and named the whole restaurant chain after his little girl Wendy. Its famous pig tailed logo was based on a real picture of her from when she was young.

Wendy’s ads starring Thomas were always sort of groaners in their own unique style. It was like watching your grandfather pitch stuff on TV. Dave looked slightly uncomfortable being there in the first place but still got our respect for showing up I think most of us gave him credit for the effort. It just seemed normal and somehow right to see him acting (badly) in the ads. Now, to be fair I’ve never really spent all that much money at Wendy’s so there is a strong argument to be made that his calm and somewhat homey ads never did manage to resonate all that well with the populace.

So, when Dave Thomas passed away it was fairly obvious they’d have to come up with a new series of ads. Having Dave continue to host them from the grave would have been mighty creepy and decidedly unappetizing as well. (for proof of this see the weirdly bizarre, and recently deep-sixed, Oroville Redenbacher avatar experiment) I was more than willing to cut Wendy’s a little slack while they attempted to find their way back to the battlefield of the burger wars in our new millennium.

So what’s the deal with the flipping wig?

I get the whole branding thing – Wendy’s iconic red pigtails appear on the melon of whatever thick-headed loser finally figures out they deserve the best burger money can buy. In each ad some sort of light bulb realization is attained by the wacko wig wearer. These ads are just so moronically stupid. Seriously, in one of them everybody is kicking trees. Yes, kicking trees until one guy, also kicking a tree, amazingly realizes that he needs and deserves a better hamburger! Curiously, by assaulting the flora this managed to create an epiphany when it came to all future ingestion of pressed meat sandwiches. Maybe kicking beef steers in their nether regions would have made more sense than putting the boots to an innocent stand of trees.

These ads just bug me so much I can’t even give them an intelligent breakdown. They defy any sane categorization. I simply cannot believe poor old Dave is not spinning madly in his grave over ads that appear to be making sport of his little girl.

Proving just how little I actually know about such things it has been reported that these lame-brained ads are a major hit with the kids in the 16-23 age groups. How scarlet pig tails pinned onto desperate actors are resonating with baggy pant wearing pierced hipsters is a mystery to me. Corporate is actually sending wigs out to all their restaurants just so their store managers can dress up like the goombas in the ads. Kinda makes you want to fill out a job application right away huh?

These guys prance around in their red yarn helmets harping on and on about their burgers being so totally fresh and completely, absolutely and positively never, ever frozen. As a rule I have always tended to believe in, and count on, the idea that the act of freezing burger patties somehow manages to guard more successfully against filthy or slightly diseased fry cooks. To me it seems an altogether safer bet than a kitchen with fresh piles of loose hamburger meat stacked around all the while being squished and squashed by minimum wage slackers more interested in choosing new ring tones for their cell phones than ensuring my fast food dining experience remains free from the stomach-flu.

I wanted to like the ads. I really hoped to see Wendy’s make a positive mark in some way. Remember “Where’s The Beef?” Everybody knows that one. I loved those ads. It was all so clear – everyone else had dinkenheimer mini burgers while Wendy’s were so friggen massive they stuck out the sides of the bun. There are few arguments better than that when it comes to choosing a hamburger.

Now instead of a clear message about “big beef “ I get pasty faced, soggy-looking burger geeks having some sort of Tony Robbins-lite realization about their place in the world who then proceed to announce all manifesto-style that they somehow deserve more. More? Give me a break. It’s a hamburger not a no-fee checking account.

Whether these ads are successful or not I do hope Dave Thomas finds a way to effectively haunt the Wendy’s executives for as long as they keep these silly things on the air. Maybe Clara Peller could even join in and give him a hand.

Now that would be an ad I’d most definitely like to see.