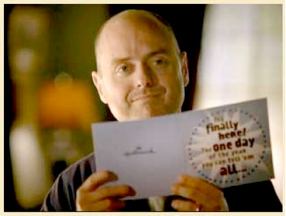 How does something that was once so over-the-top cool plummet all the way down to punchline status? It always seems the higher you fly the farther you fall. Well, few folks fell further or harder than Canada’s own M.C. Hammer. The poor bugger went from platinum cufflinks and a thirty person strong entourage to begging for money as a reality show contestant. It’s kind of cruel when you think about it. He did nothing more than record a song that everybody, and I mean everybody, decided to like for a while and when we tired of it, we tired of him. He never did anything different. He was cool and then he was not. All of us have something lurking deep in our closet that suffered a similar trajectory of existence. (Can I interest anyone in an acid wash jean jacket?) The funny thing is how sometimes when something is so out of cool that it manages to make its way back in again. In this case we have Hallmark to thank.

I know I’ve missed Father’s day by a couple days but sometimes an ad just deserves extra special recognition. I positively loath ads that exploit the whole “dumb dad routine” that seems constantly pushed by the advertisers. Dad is always an idiot, always getting hurt or at a minimum cracked in the crotch repeatedly. I realize dads are pretty much the last group that one can safely make fun of in a PC world, but I don’t have to like it.

Enter Hallmark who is pushing its line of annoying musical cards. These cards aren’t new but they have become a little more flash since the days of tinny renditions of “Happy Birthday”. Now they actually offer short clips from hit songs that play on an extended loop when you open the card. And trust me, it is surprisingly embarrassing attempting to pick one out in the store. You pick one up, open it and get a face full of “I’m too sexy for my shirt”. The looks from the other card hunters is usually enough to guarantee you’ll put it down fast and keep moving.

Hallmark realized this, and knew they had to act fast to get those cards moving off the shelves. I think they came through like champs. The ad they ran for Father’s day was great. In it, the kids hand dad a card. He calmly opens it only to hear the infamous MC Hammer tune “U Can’t Touch This.” Dad allows the slightest of smiles just as we see him retreat deep inside his head to where he is now imagining himself as MC Hammer – totally and completely. This is where the ad rocks.

It is a shot for shot, full on copy of the MC Hammer video except with bald-guy dad in the yellow hammer suit with the hammer pants doing the hammer dance. Hammertime or bust! He is so serious and so very intense that as he navigates the world of his very own MC Hammer fantasy video you cannot turn away. Finally, the kids voices pull him back to reality just long enough to remind us all that it is indeed a dream. And then he smiles, heading back inside the card for the perfect world of being Mr. MC Hammer, but when he was cool, of course.

This ad does have dad acting somewhat silly, but by putting it in his own mind it just somehow works. He’s not being made fun of, even though we are laughing at him. He doesn’t know it. He’s just being Hammer and that made me smile.

Johnny Cash singing “Ring of Fire”, The Romantics performing “What I Like About You.” They got the Stones doing “Time is on My Side” and even more traditional hits like “Hail to the Chief” or “He’s A Jolly Good Fellow.”  They’ve got more than enough selection to successfully answer nearly any weird fetish or sense memory that some life stuck drone, or myself, may possess. Pick one up today and experience the ride backwards to the days when you were cool, or at least thought you were.