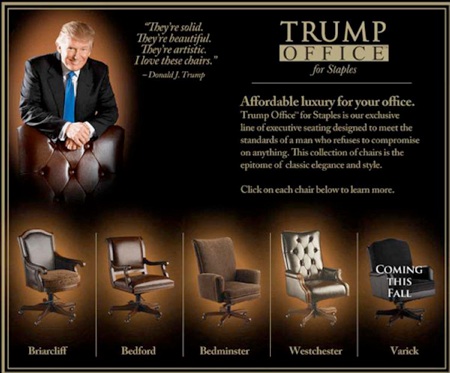 What the hell happened to Donald Trump? Seriously, when did this man transform into such a complete baboon? I remember him back in the eighties when he was just a moderately stiff yet slightly colorful real estate guy who would be interviewed every now and again. His first book “Trump: The Art of the Deal” came out and it seemed that anyone with even modest visions of being a business big shot had committed it’s principles to memory.

I could totally understand people emulating him, even wanting to be like him. He told a compelling story, preaching loud the virtues of hard work and fixating on the details. When he eventually become insolvent and had to battle back to regain the fortune he lost Trump managed become even more famous. No longer just a straight-ahead success but a sort of Horatio Alger story told in reverse, minus of course the distinct concern for others.   He was someone who had hit the bottom and managed to claw his way back up again. Cue the inspirational orchestra.

And yet here I am face to face with an ad for Trump Office chairs which are apparently now being sold at your local Staples outlet. I’m sorry Donald but this has just gotten ridiculous.

I’m sure my revulsion to his latest “huge” deal stems from his weirdly constant presence in the press since the debut of his reality show “The Apprentice.” The show was a good idea but quickly devolved into a sort of office blood sport where Trump now does little more than provoke boardroom-table wannabes to stab each other in the back while they jockey for the best position in which to kiss his ass. Add in the moronically ill-advised feud with Rosie O’Donnell and you see where I’m at. Can anyone explain to me how fighting with a slightly hostile and possibly bipolar lesbian is a good idea? Trump looked like a schmuck.

Somehow his being everywhere has come to bug me. Seeing ads with his name and face front and center have the opposite effect to making me rush out and buy. They make me recoil with a surprising revulsion. Really, he has become so annoying that I will go out of my way not to buy something with his name on it. It is the total reverse of branding. His name, his brand now repels me from an item I might have otherwise purchased before learning he was associated with it.

And I don’t think it’s just because I’m suffering from Trump overload. Contrast Trump’s pervasiveness with the father-son duo battling it out every week on “American Chopper.” The flotilla of OCC product they are constantly wearing or displaying or tossing around on their show should have me just as annoyed at them. They have their names and faces on everything from shirts and hats to underwear and coffee mugs. Even still, watching Paulie strut around in a branded ball hat and hoody, opening his OCC wallet to buy an OCC poster seems less deranged to me than Trump bragging about wearing Trump cologne, drinking from a fridge full of Trump water and vodka while wearing a Trump tie and carrying a Trump briefcase. It just screams “pathetic loser” while strangely the other does not.

Is it a sort of snobbishness related to building motorcycles versus being a business success? You tell me. If you met a guy who worked in a motorcycle shop that lived and breathed Orange County Choppers and then met a businessman, say a guy like Bill Rancic, who wore nothing but whatever Trump branded swag he could get his softly manicured hands on, tell me who comes across as the bigger idiot? Rancic, hands down.

I never used to have a problem with Trump. I didn’t really mind him either way. I read his book and was intrigued by his success. It’s this ever-refreshing train wreck of a tabloid persona he is continuing to foster that has got to go. It might serve to keep his brand front and center but at what price? Is anyone even buying into his routine anymore?

Maybe some still do, but for me, I think I’d rather get fired.