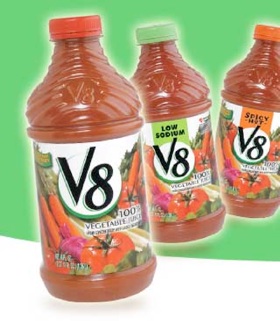 Snotty know it alls really get under my skin. I don’t imagine I’m the only one this is true for, but it just bugs the crap out of me when someone acts all superior or judgmental about anything. There are more than enough of them roaming the earth and to think that any company would willingly make one of these yard-arms a pitchman for their product blows my mind.

You must remember the classic V8 vegetable juice TV ads. Men, women or even children, all at different times or in different places realizing just a moment too late that they could have had a V8 vegetable juice resort to slapping their foreheads in frustration exclaiming “I coulda had a V8.” Memorable, creative and consistent. They perfectly captured the brand and left a memory (and a mark) most will not soon forget.

But like most brands V8 decided they had to punch it up a bit if they wanted to sell more drinks. So they made some new juices, drew some new labels and finally ran some new ads. One of them, to me anyway, seems to defy logic.

The commercial shows a group of business types in a restaurant just finishing up their dinners. The busboy asks if he can pick up the plate of one of the older gentlemen and realizes the guy has not even touched his vegetables. He asks if he is still working on them. The guy says no, he’s all done. Frowning with disdain Mr. busboy lifts his hand and smacks the old guy in the head just before turning and walking off in somewhat of a huff, looking quite satisfied and even pleased with himself. What the heck’s the deal with that?

It’s one thing to suggest I know what’s best for me but simply keep forgetting it. This was the premise behind “I coulda had a V8.” It’s quite another for some self-righteous dish jockey to walk up and smack me because I didn’t eat my vegetables. Does V8 really want me associating their drink with a smack in the head from the Vegetable Police?  How dare they suggest I shouldn’t be eating burgers and fries. If I want gobs of fat and cholesterol then I will have them and no busboy with an inflated sense of his importance is going to say or do otherwise. Seriously, if some waiter slapped my head I’d bury the little drip up to his neck in a garden and cover his head with aphids.

I get V8 wanting me to think it’s my duty to drink their stuff, or believing that my body needs their precious nectar but why go so far as to suggest I’m an idiot deserving of a slap for not eating my vegetables? This may have been a shot at “funny” but it didn’t leave me in the best of humour. Add a second part to the ad where the guy that was slapped grabs a V8 from his pocket and proceeds to clothesline the rude little creep to the floor, sit on his neck and force-feed him an entire case of V8. Now that’s entertainment.

I didn’t like fingers wagging at me when I was a kid and I like them even less when it’s coming from a drink that tastes like soup without the good parts in it. Honestly, this ad had a sense of superiority I had not seen since those anti-smoking ads where they go on about the truth. Now those guys I could see slapping someone for not agreeing with them.  Who wrote this campaign? Moe from the 3 Stooges?  Maybe V8 should employ an army of jack-booted thugs who do nothing more than go around slapping anyone not drinking their juice. I’m sure that would boost sales exponentially.

Why would a guy order a V8 after getting slapped? I’d yell like a stuck pig or at the very least stiff my server.

I understand V8 wants to update and be fresh and all and I’m sure it was a great idea when they discussed it around the boardroom table. “Hey, let’s do the reverse of the head slap thing. It’ll be great!” Maybe they should have tried a new tagline too. Something like “Avoid assault, drink V8” or ‘don’t let me catch you without a V8, or else.” Now that I think about, it maybe totalitarianism has a place in marketing after all.