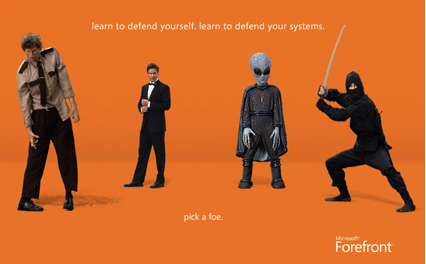 Technology has a way of making me feel dumb. I appreciate cell phones and computers and televisions and even toasters but I don’t have a clue as to how they work. I know I could sit down and attempt to educate myself on the hows and whys, but to tell you the honest truth I am just not interested enough to do so. Add to that my inherent laziness and there you go. In truth, even if I could potentially grasp what was going on inside a computer’s brain I’d much rather keep the space inside my head free for more important things, like the lyrics to “WKRP in Cincinnati”. You know, stuff that matters.

Even still, every once in a while I like to take a kick at the can and try to help out those that actually know and understand what they are doing when it comes to technology. Take my brother. He knows all about that sort of stuff – firewalls, sequel servers, spyware, whoozits and whatzits – so every now and again I try to offer a nugget or two that makes it look like I care about what’s going on and that I’m not a complete idiot.

“Hey dude, maybe the computer network needs a better level of protection, you know something like Microsoft’s new Forefront set up to protect the business from those ever-changing threats. (I took this from their literature – I have no idea what it means)

Now, if brother dearest asks me any questions I immediately hedge my answers and direct him to the Microsoft website www.easyeasier.comsaying “I don’t know but that’s a good point. They got all the details there.” He’s none the wiser and I appear to have contributed to the successful operation of the office. Hoo-rah.

The coolest part of all of this is how I came to even notice Microsoft’s Forefront in the first place. You guessed it. They had a really neat ad. The first one I saw was in a magazine with a two page splash ad in bright orange showing how to foil an alien invasion. Seriously, an alien invasion! They had diagrams and how-tos showing how to beat the aliens and send them packing. Things like sneezing on them in hopes of exploiting possible weaknesses in their bizarro immune systems or pretending that squirrels are our masters and then running and hiding while the aliens attempt to negotiate surrender from the nut gatherers. Microsoft’s tag line is that “stopping an alien invasion is easy, but protecting your systems against hackers is even easier”, if you use Microsoft Forefront, of course.

Is it? I have no idea, but I loved the ads. When was the last time Microsoft had anything even close to resembling a memorable ad campaign? It’s been a while.

If you go to their website it gets even better. On it you have a choice to do battle with a secret agent, a zombie, a ninja and our now familiar alien. They have groovy music playing while a crisp shirted technician confidently dispatches the enemy of your choice. While I’m certain real, live tech guys would be far too busy working to burn precious minutes with such trivial time wasters I am living proof that easily distracted monotones like me love nothing more than to wile away the hours playing stupid consumer website games. Seriously, the hero uses a banjo to beat the Secret Agent. Awesome.

Will future versions of Microsoft Forefront try to cut into the market shares held by the likes of Norton AntiVirus or perhaps even McAfee? (Yes, I looked them up.) I have no idea. But I know getting a unique ad campaign that suggests it’s easier stopping viruses and hackers than doing the smack-down with zombies is brilliant. ‘Cause when an ad campaign is interesting enough to get you talking even the folks that know nothing about computers will start to bug those that do. “Hey Travis, stop eating rice crackers for a second and tell me what’s the deal with Forefront? Is it any good or what?”

And really, that is all the Dark Overlord known as William Henry Gates the third needs to effectively penetrate the pedestrian defenses we pathetic earth-bound organisms offer as he ascends yet another level towards his ultimate and obviously pre-destined position as Emperor of the entire solar system. At least, that’s what my brother would say.