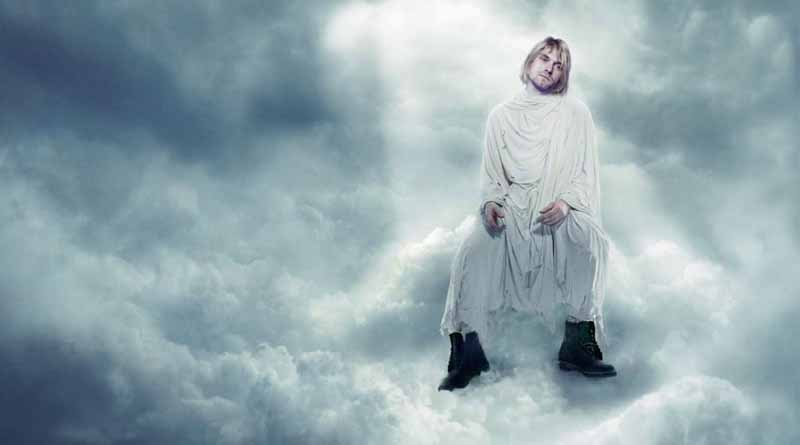 You would think that death wouldn’t play the largest of roles in general commercial advertisements, except maybe those “Shady Pines” type of funeral home commercials where the silky smooth voice over mentions the term “loved ones” at least six times before coming in to land on lots of flowers, mountains and the odd spiritual verse or two. Death is such a downer. Why bring it into an advertisement unless you really had to?

Doc Marten’s of all people decided to run a magazine campaign where they picture separately four infamous ”rockers” as white-robed citizens of “heaven,” hanging on the clouds and wearing their Doc Marten’s. The ads feature Joe Strummer, Sid Vicious, Joey Ramone and Kurt Cobain. Leaving aside the basic taste issue can anyone explain to me what Doc Marten’s was thinking by giving the thumbs up to this one? You could not pick a more clearly anti-establishment, anti-capitalist group of individuals than this bunch. The Sex Pistols? The Clash? Nirvana? A lot of people believe one of the main reasons Cobain shot himself was his depression at the over-commercialization of his work. That, or possibly his ravenous and unhinged drug use. It really hasn’t been fully settled at this point.

Happily, that well known guardian of all that is decent and moral, Courtney Love has stepped in and pulled the plug, threatening Doc Marten’s for using Kurt’s image in a “tasteless way.” Apparently, in the United Kingdom companies are free to use the images of dead celebrities to sell stuff, whether approval is given or not (Though I highly doubt Princess Di will be seen selling anything soon). Such things are guarded much tighter in the United States. Anyway, Doc Marten’s backed down, fired their ad agency for printing ads they had already approved and professed their deepest and most sincere regrets at annoying Kurt’s fan base, which as a group haven’t been even semi-lucid since 1994 anyway.

It’s totally weird to see the dead rise again and with the capabilities of filmmakers and digital toolkits improving at a pace that seems almost daily we might as well get ready for more of it.

Remember the Gap’s Audrey Hepburn ad? They used her footage from “Funny Face,” tweaked it and then melded it into a Gap ad to re-introduce black skinny pants. There was the Steve McQueen ad a few ears back where the icon from “Bullitt” drove the newly redesigned Mustang. Good old Steve, dead as a doornail but still cool as ever and pushing the pedal to the medal in service of Ford’s auto dealers everywhere.

Fred Astair danced for Dirt Devil while Lucy and Desi shilled for the lottery. Gandhi, Martin Luther King and Einstein posed for Apple computers and John Wayne drank for Coors. Cagney and Bogart sipped Diet Coke and even poor Chris Farley has reappeared as “the bad example” on billboards warning of the dangers of drug and alcohol addiction.

Every one of these ads is similar only in the fact that the star of them was long dead before the idea was even created. Too bad Christ died on the cross, now Hollywood just pixelates everything and voila, eternal life for anyone that retains a positive “Q” rating.

I am of mixed emotions about this. Advertising at the best of times is unreal. So, no one can really expect that just because a celebrity is appearing in an ad that he or she is doing anything more than working for pay. They have bills just like the rest of us. Well, okay I don’t have a full-time suit de-linter, or an account with Dr. Feelgood or a hand-carved Pellegrino waterfall filling my marble swimming pool but you get the idea. These people owe money. I am sure more than a few stars have cashed in solely to provide for the family and friends when they needed to. So, in that vein what does it really matter if the descendants now sell an image for an ad or two to make their lives a little easer. Kurt may have been personally ticked at pumping for Doc Marten’s but I’d bet he’d have swallowed his discomfort if it meant his daughter would get something she really needed, like a positive role model or something similar. So, in that vein I kind of have to be cool with it. Would I really care if they found footage of Genghis Khan and then made him sell disaster insurance on late night TV? No, not really. Maybe it’s because he’s so old that it doesn’t matter. Maybe we’re only nervous because the deaths in question are still relatively fresh. Perhaps we just need to get over it and roll with the requirements of capitalist commerce.

But I have to say, staring at the photo-shopped image of Cobain on a cloud, sadly posing against his will, leaves a strange emotion. Right there in front of me an actual, real person has become a total mannequin, a completely impersonal display of shoes onto which a company is attempting to graft whatever his musical soul might have meant at one time in the past.. And you know, that just ain’t right. Kurt is dead. Maybe it’s good the Doc Marten ad is too.